Little Walter. Paints a picture, doesn’t it? How’d you see it, just then? Maybe a snorting Pug chewing up and snotting all over a living room pillow? The checkout guy at Trader Joe’s? Your goldfish?

Little Walter? How about this? A guy smaller than most and a giant among stars—Marion Walter Jacobs, a blues artist from Marksville, Louisiana. 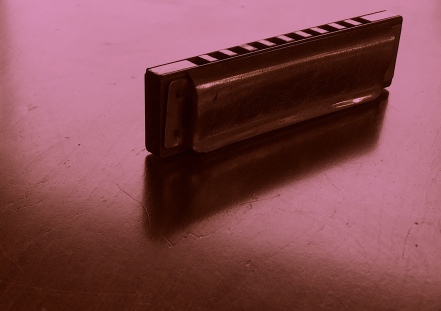 The bridge from Blues to Rock & Roll was crossed in 1945 when Little Walter, frustrated by his harmonica being drowned out by amplified guitars, employed a small palm mic with which he could stand toe-to-toe with the other instruments. And, he took it one step further pushing the amp to eleven and creating a sound never-before heard. Little Walter invented the harmonic distortion fuzz that went on to serve the greats who followed including Jimi Hendrix. In 2008, Little Walter was posthumously inducted to the Rock & Roll Hall of Fame and he would have looked great at the ceremony in his suit and two-toned shoes.

You might have guessed life wasn’t easy for a guy named Little Walter. Hitch-hiking, trains, busses, dive bars, river fronts, police run-ins, booze and women. Between sets, some of the ladies couldn’t keep their hands off him. “He’s so cute!” Their men—their large men—didn’t like that.

The last physicality Walter paid for love wasn’t that bad. “Just a slappin and a pokin,” compared to the police beatings and the big guy a couple months ago. He retired to his girl’s house—Lois’s house—that early morning and thought maybe he’d lay down for a minute. Just sleep a while. Oh, yeah, there ya go. That’s good. The dark, the quiet, the black door closing on all the noise. The dark’s good—so good. A little nap before the next set.