Looking through my way old sketchbook: 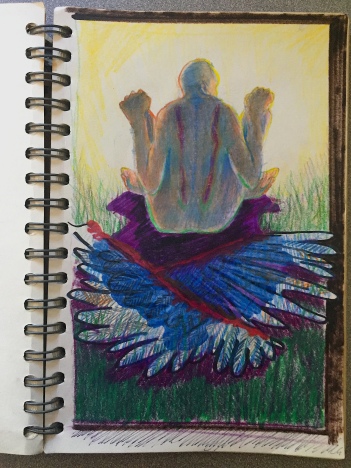 She soared low through the trouble, the tangles and the roar and had a better look – to see closer for herself. She would take word back, everything seen first hand, and the others would intervene on Earth and make it better. The rumors were true. Down here was chaos. A black man murdered by police, a child pepper-sprayed, an old man run over, people shoving and being shoved, attack dogs and and there was tear gas. She turned and adjusted her wings to ascend and was caught in the power lines for a second, broke free and something tore at her wing. Then another and she was being shot. Tangled in their net, they cut off her wings. She saw the people closer than she had hoped to, and smelled them, and heard their words aimed at her, “Elitist. Snowflake, and don’t bring your progressive ideas here.” They propped her up and made a video. “We got one!” Those were the last sights, smells and words she would know. Without her wings, and within minutes, she would die.